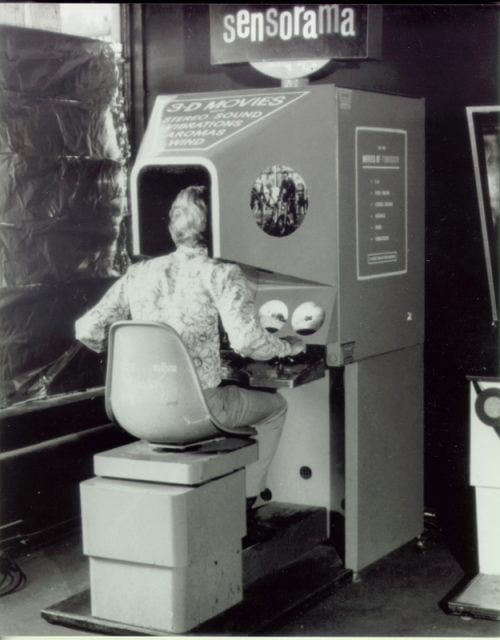 Think back over the past few decades. There are several technologies which have completely changed how we live our day-to-day lives. Smartphones. The internet. These technological innovations have become such an integral part of our daily lives that we forget how new they really are.

Virtual reality (VR) is the next step in this technological chain. The ability to use computer technology to create an interactive 3D environment where objects have a real sense of presence. This incredible feeling of immersion that VR headsets create, as well as the seemingly infinite number of personalization opportunities, means that VR technology could soon be used in all walks of life.

But where did it all start? To save you from hours of deep diving into Google, here is a brief history of VR technology:

The concept of virtual reality and simulated environments has roots dating way back to the 1860s with the idea of 360-degree art via panoramic murals. However, for this article we’re going to start off in 1929 with the advent of flight simulators.

The first Link Trainer responded to the pilot’s controls and presented an accurate reading on the included instruments. For the first time, pilots had an accurate training aid that they could use to safely learn how to fly complex aircrafts. 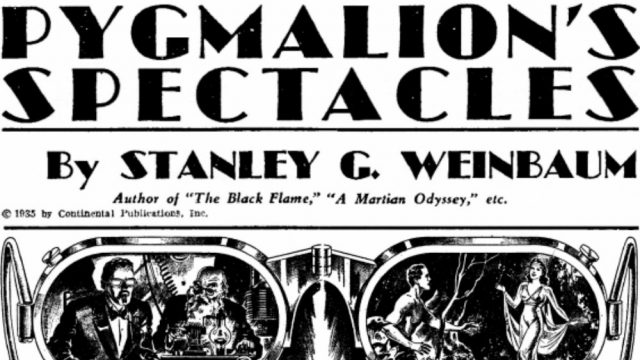 The idea of virtual reality and VR headsets first became a item of public interest through science fiction – in particular from Stanley G. Weinbaum’s short story Pygmalion’s Spectacles (1935). This sci-fi story told a tale of a goggle-like device which allowed users to view a ‘holistic holographic experience’ that even had realistic touch and smell elements. 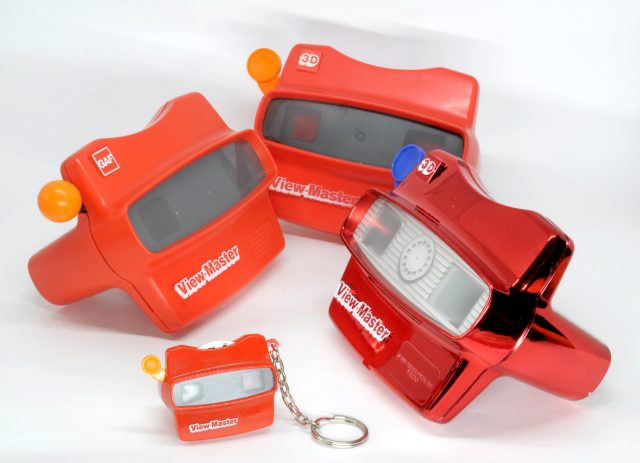 Sawyer’s Inc. unveiled their first ever View-Master at the 1939-40 World Fair in New York. At first, the View-Master simply looked like a pair of binoculars. But when users looked through the lenses they were able to view 3D images!

How? Well, the View-Master is a stereoscope. Simply put, it is a device where you can view a pair of separate images which depict left-eye and right-eye views of the same scene. Look at these scenes together and you see a single 3D image.

Following their successful debut, View Masters were sold with View-Master reels – a set of thin cardboard disks each containing 7 stereoscopic 3D pairs of transparent color photographs on film. These View-Masters were originally intended to be an educational tool for adults but have since become a fun, engaging toy for children of all ages. 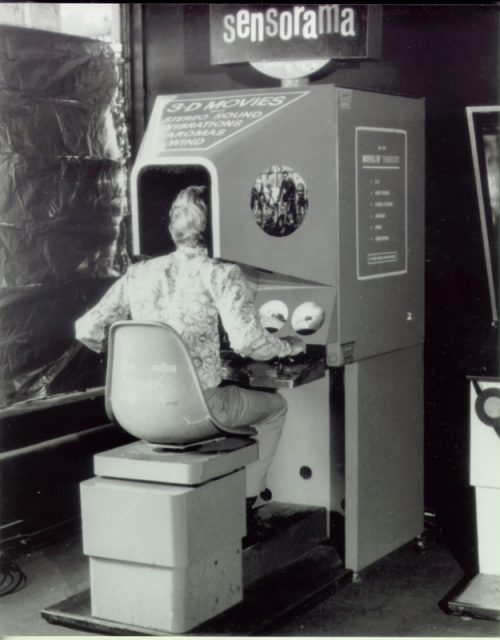 In an attempt to create a more complete cinema experience, cinematographer Morton Heilig invented Sensorama; an arcade-style booth which is regarded as the first ever virtual reality machine.

Created in 1957 but patented in 1962, Sensorama was a non-computerized VR machine which displayed stereoscopic 3D films combined with audio, moving air, vibrations and aromas (Think of one of those ‘4D’ experiences that you can go and see at theme parks!). Sensorama also had a rotating chair and some stereoscopic imagery. This marked the first time that users could control some aspects of their VR experience.

Spurred on by the success of Sensorama, in 1960 Morton Heilig invented the Telesphere Mask which is upheld as the first ever VR Head-Mounted Display (HMD).

This is when things started to speed up… 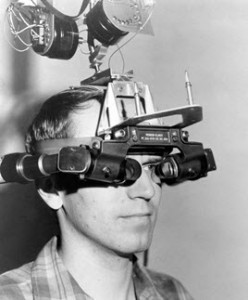 The Philco Corporation invented the first motion-tracking Head Mounted Display (HMD) in 1961; known as the Head Sight. This innovative device was engineered with the military in mind and featured a head mount and video screen as well as a tracking system that was linked to a series of cameras. The major advancement of Head Sight was that users could move their head to automatically trigger an adjusted view of their surroundings which had never been achieved before.

Sutherland outlined his notion of absolute display in a 1965 paper and speech wherein he presented his vision for the future of VR. Far ahead of his time, Sutherland predicted (and encouraged the move towards) the advancement of computer graphics, audio, navigation and interaction to a point where they were indistinguishable from real life. Sutherland’s theory of complete perceptual immersion was ground-breaking and it inspired an entire generation of scientists to push the boundaries of VR technology.

1968 – Invention of the first VR headset 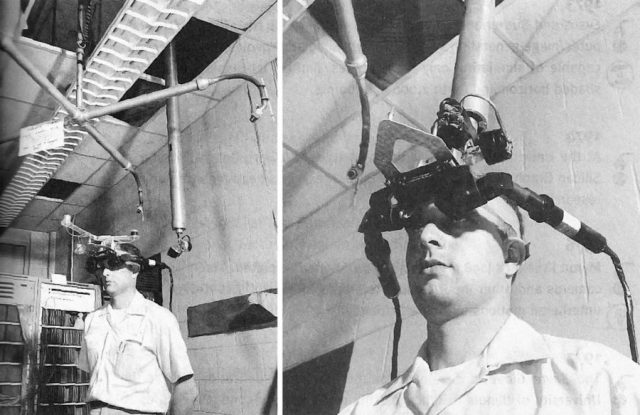 Remember when we said to remember Ivan Sutherland? Well that’s because in 1968 Sutherland and his student Bob Sproull invented the first ever virtual reality headset. Their prototype was a virtual and augmented reality head mounted display which they introduced in their paper ‘A Head Mounted, Three-Dimensional Display’

(Extra info: Due to the scary ceiling-mounted aesthetic of Sutherland and Sproull’s invention it was nicknamed The Sword of Damocles!) 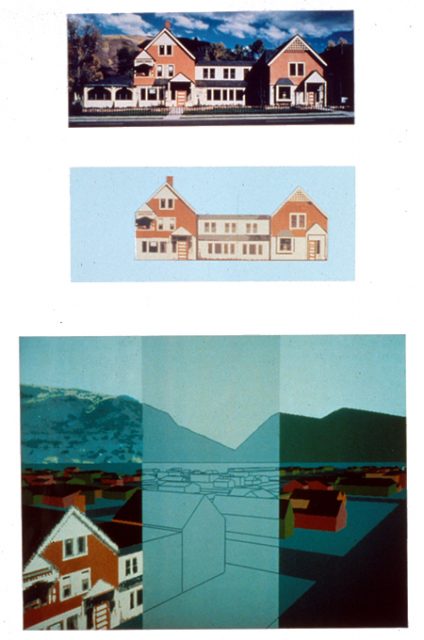 The Quick and Dirty Animation System developed at the Architecture Machine Group in 1979 in conjunction with the Aspen Movie Map project. This figure shows the texture-mapping feature (June 1st, 1979)

Researchers at the Massachusetts Institute of Technology (MIT) created the Aspen Movie Map in 1977. This project enabled viewers to experience a virtual tour of Aspen, Colorado. To create the Aspen Movie Map, MIT used a car-mounted, gyroscopically stabilized, camera which took a snapshot of its surroundings every 10 feet.

Aspen Movie Map was the first use of such technology and is regarded by many as the inspiration for future sat-nav applications such as Google Streetview.

VPL Research is a company that was founded in 1985. They were the first company ever to sell VR goggles and gloves. In 1987 the founder of VPL, Jaron Lanier, popularized the term ‘Virtual Reality’.

Now you might be wondering, why is this such a landmark? Well, before ‘virtual reality’ became a popular term, there was no real collective way to describe VR technology. Giving scientists and members of the public this simple, collective term of ‘Virtual Reality’ enabled the VR industry to expand and evolve like never before. 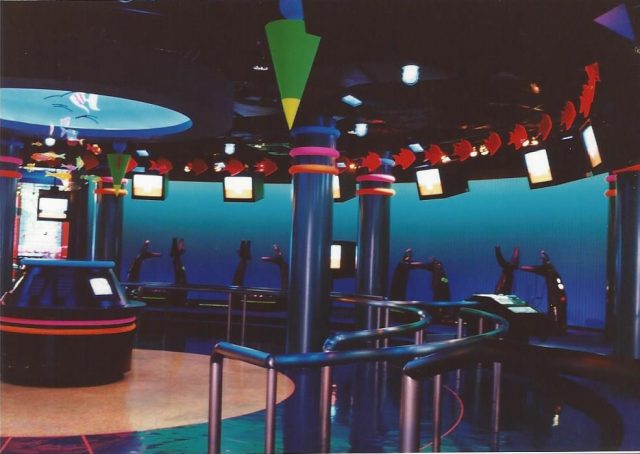 Antonio Medina invented a virtual reality system called ‘Computer Simulated Teleoperation’ in 1990 in order to navigate the Mars Rover from Earth. This system enabled Medina to ‘be in the driving seat’ of the Mars Rover within a virtual setting and it paved the way for commercial applications – namely Virtuality.

Virtuality was the first mass production of VR arcade games and entertainment systems. These games had multi-player capabilities so that members of the public could experience a new level of gaming immersion that they had previously never thought possible! 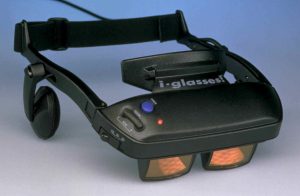 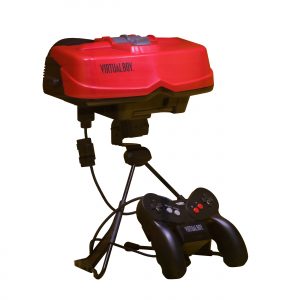 In the early 1990s the video game industry was booming. Games such as Star Fox (1993) on the Super Nintendo Entertainment System (SNES) used a Super FX Chip to create the first accelerated 3D gaming experience on a home console.

Responding to this demand for high quality, immersive gaming experiences, the Virtual IO I-Glasses were invented. No longer a far-fetched sci-fi notion, this affordable home VR headset made virtual reality technology more accessible to everyday households. This led to similar VR headset inventions throughout the 1990s such as Nintendo’s Virtual Boy (1995).

The Oculus Rift CV1 (Consumer Version 1), a virtual reality headset made by Oculus VR and released in 2016

The modern day VR revolution can largely be attributed to the work of Palmer Luckey who developed the first Oculus Rift headset. Palmer Luckey wanted to create a high quality yet affordable VR headset for everyday gamers. We think it’s fair to say he succeeded!

Although the initial Oculus Rift prototype was only capable of rotational tracking, it had a 90 degree field of vision that was unheard of in the consumer market. Palmer Luckey’s prototype impressed investors so much in 2012 that the Oculus Rift Kickstarter campaign raised $1 million in just 3 days! 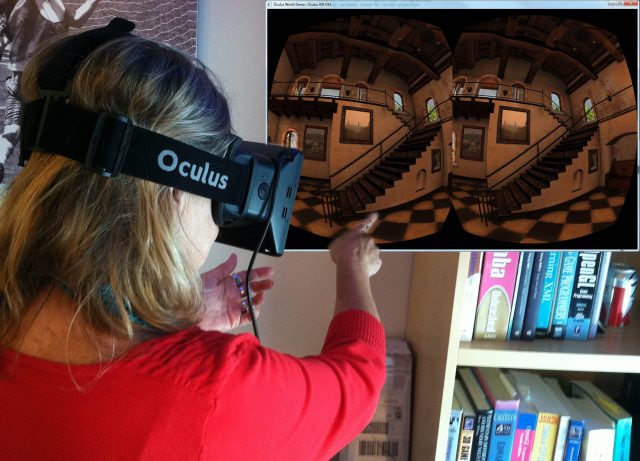 Following the success of Oculus Rift’s headset prototypes, Facebook CEO Mark Zuckerberg purchased Oculus VR for $2 billion. This move drastically changed the VR landscape because it lead to many large corporations such as Sony and Google investing heavily in VR technology. In fact, in 2014 Sony launched the first VR headset for the PS4 (‘Project Morpheus’) and Google unveiled the Google Cardboard affordable VR headset. 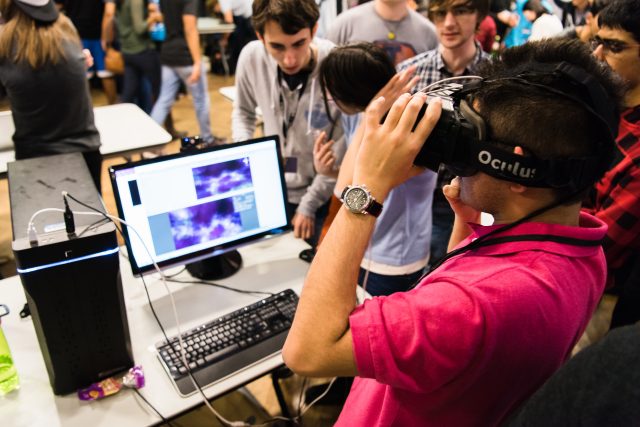 A team at HackIllinois 2016 demoing their VR project (February 2016)

Since purchasing Oculus VR, Facebook have invested over $250 million in VR content creation. Most notably, in December 2016 Oculus launched ‘Rooms’ and ‘Parties’ on Facebook which meant that users could now chat, make calls and socialise in a virtual setting via their VR headsets. 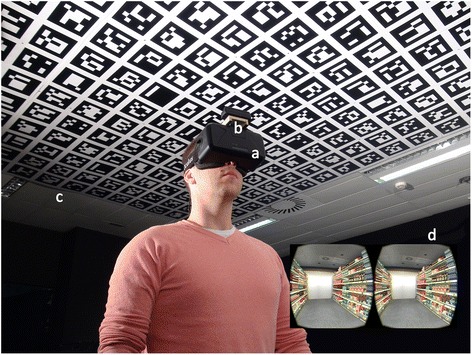 Have VR headsets changed your life? What do you think is the next step for VR technology? Let us know your thoughts in the comments section below!